To share your memory on the wall of Sara Reeser, sign in using one of the following options:

Sally spent most of her years in the food service arena where she worked at Rummy's Polynesian House and at Butz's Luncheonette in Birdsboro. Thirty-nine of her later years were spent in the kitchen at Limerick Diner, which was started and owned by her brother, Edward "Butch" Moore, who preceded her in death.

Sally's first love was her family and this loyalty was evident throughout her whole life. She also enjoyed reading, crossword puzzles, knitting, jigsaw and solitaire. For over 30 years she found joy in developing her skills in ceramic art activity. Friendships were also important in her life and she regularly gathered with old friends to keep updated. Though she struggled with the limitations of Parkinson's as she grew older, she still took special joy in family get-togethers. Another important part of her life was her faith, first at St. Michael's Episcopal church in Birdsboro where she was active for many years. After their closure she transferred to St. Thomas in Morgantown and in her later years she was an active member of Community UCC in Exeter.

Sally and her husband Bob shared their life for 63 years until his death in 2014. The two spent their later few years living with their oldest daughter, Kathy, wife of Dr. Bruce May, in their Exeter home. Fracturing her leg in a fall at home required a move to Berks Heim in 2017, where her family was so appreciative of the loving care she received on B-3. Sally's family was blessed to find her back home for the end of her journey.

The Reesers' other daughter, Rebecca is married to Jim Terry and they reside in the Atlanta area. Sally's son from a previous marriage, Stephen Wilson (Roberta) lives in Birdsboro. Sally is also survived by her sister Ruth Gordon, widow of Paul, and nephew Michael Miller, both of Nebraska and niece Debra Herr, Schwenksville. In addition are grandchildren Shawn Auman (Tammy), Sara Beth Terry Dean (Dexter) and Meg Terry, as well as Stephen Wilson and his sister Selena Wilson. Also, her great-grandchildren are Hunter Auman, Jaymes Blank and Robby and Hailey Peters.

Visitation with family and friends will be held on Saturday August 22 from 10:00 am to 11:00 am in Lutz Funeral Home, Inc., 2100 Perkiomen Ave., Mt. Penn. The service and interment will be private. In lieu of flowers, contributions may be made to Community U.C.C. Church, 3330 St Lawrence Ave, Reading, PA 19606. Lutz Funeral Home, Inc. is in charge of arrangements. For online condolences, please visit www.LutzFuneralHome.com
Read Less

To plant a memorial tree in honor of Sara A. Reeser (Moore), please visit our Heartfelt Sympathies Store.

We encourage you to share your most beloved memories of Sara here, so that the family and other loved ones can always see it. You can upload cherished photographs, or share your favorite stories, and can even comment on those shared by others.

Plant a Tree in Memory of Sara
Plant a tree 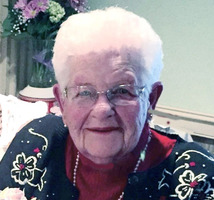