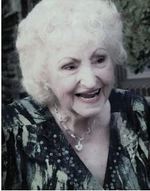 Jennie (Valenza) Viggiano born July, 20, 1918 daughter of Giacomina and Emmanuel Valenza passed away on May 7th, 2020. She was a resident of Berkshire Center since March 2015 and she lived in Exeter Township Pennsylvania, for 15 years, in her own home which she designed. Prior to that she had homes in Somers New York and prior to that the Bronx New York. She was the widow of husband Frank who passed away in 1968.
Jennie was born and raised in Greenwich Village New York and loved family gatherings and made sure there was always plenty of good food for everyone, whether they were hungry or not. Jennie was always well dressed and lived a religious life in spirit and actions. She was a kind and caring individual and was sought after for advice (and didn’t hesitate to give it when necessary). She was loved by all and will be terribly missed, not only by her family and friends, but by everyone who knew her – including the many aids and care givers at the nursing home where she resided.
Jennie was the matriarch of her family of 2 sons and 2 daughters - Joseph Viggiano and Frank Viggiano and his wife Valerie, Christina Small and her husband John and Jacqueline Pellicano and her husband Peter; 10 grandchildren - Peter and Mark Pellicano and Jeanine Miles, John, Frank and Stephen Small, Jeannette Torti, Mark and Frank Viggiano, and Joseph Viggiano as well as 25 great grandchildren. She was a truly loving individual whose main concern was always about the well being of her family.
Jennie was the founder and first President of the Fanfani Ladies Lodge of the Sons of Italy for 15 years. Jennie also held positions of state trustee, lodge, state and national deputy and attended several National conventions as a delegate, and in 1995 was awarded the Dr. Vicenzo Sellaro Award.
Representing the State Lodge, she was part of a committee of ten that went to the United Nations in defense of the cause to not give up the search for the missing servicemen of the Vietnam War.
Her involvement in charitable activities included - serving as commissioner for the Garibaldi Meucci Museum, co-chair of the Arthritis Foundation Telethon, she chaired several fashion shows to raise money for the Mother Teresa Foundation and the Anita Garibaldi Beautification Project.
For many years Jennie owned and operated her own answering service business in New York City and was an indispensable part of running the family restaurant, the Mona Lisa, when her husband was alive.
The Lutz Funeral Home will be handling her initial preparations and the Clark Funeral Home in North Salem, New York will be handling internment at St. Raymonds Cemetery in the Bronx, New York. A celebration of life will be held at future date.
Condolences may be sent to Frank Viggiano (captainfrank46@gmial.com ), Jacqueline Pellicano (philpeters@aol.com, Christina Small (johnbquick@aol.com) and Joseph Viggiano (josepheviggiano@gmal.com).