To share your memory on the wall of James Miller, sign in using one of the following options:

He graduated from the Pennsylvania State University with a B.A. in Liberal Arts in 1960 and married the former Janet R. Hille of Philadelphia. He graduated from Yale University Divinity School with a Master of Divinity degree in May of 1963. While attending YDS, he served for two years as a student assistant at First Baptist Church in Bradford, CT and one full year as assistant to the minister of the First Congregational (UCC) Old Stone Church of East Haven, CT. The couple worked at East Penn Camps' Mensch Mill site near Alburtis, PA for several summers where they first met.

Following graduation from Yale Divinity School, Miller became the first full time pastor for Epler's United Church of Christ, Leesport, PA in 1963. Later, Miller went to Trinity UCC, Mt Penn where he served as pastor for 42 years. Active in the Reading Berks Ministerium as well as the Reading Berks Conference of Churches and Kirkridge, an ecumenical retreat and study center in the Poconos. Miller served on various boards and committees as well as serving terms as president or chairman of all three organizations. He also served as moderator of Heidelberg and former Reading Associations of the UCC and was chair of the Theology Committee of the Pennsylvania Southeast Conference of the UCC for a number of years.

Dr. Miller received the Master of Sacred Theology degree in 1975 and his Doctor of Ministry degree from Lancaster Theological Seminary in 1979. Miller chaired the Focus Renewal Ministries, the national UCC charismatic renewal organization and was involved with several other church renewal organizations over the years. Miller used journal writing for developing and working with the unfolding careers and personal lives of clergy and laity alike. Miller led hundreds of the journal workshops over the years across the country. Following his retirement in 2008, he served at several churches as interim pastor. He also served as a summer minister for the Frenchboro Congregational (UCC) Church, located on the Island of Frenchboro, Maine from 1967 until his retirement.

Visitation with family and friends will be held on Saturday, February 16, 2019, from 11:30 am to 1:00 pm with a service beginning at 1:00 pm at Trinity U.C.C., 2449 Cumberland Ave, Reading, PA 19606. Interment is private. In lieu of flowers, contributions may be made to Trinity U.C.C. at the address above. Lutz Funeral Home, Inc. is in charge of arrangements. For online condolences, please visit www.LutzFuneralHome.com
Read Less

Provide comfort for the family by sending flowers

We encourage you to share your most beloved memories of James here, so that the family and other loved ones can always see it. You can upload cherished photographs, or share your favorite stories, and can even comment on those shared by others.

Posted Feb 16, 2019 at 01:21am
Sending prayers and our sincerest condolences during this very difficult time. Reverend Miller was so influential to so many people and will be missed.
- The VanCoeur Family
Comment Share
Share via:
KT

Posted Feb 15, 2019 at 08:42am
May fond memories of your father bring you comfort during this hard time in your life. Our heart and prayers go out to you and your family.

Kerry and Brent Test purchased flowers for the family of James Miller.

Peggy and Jon purchased flowers for the family of James Miller.

Posted Feb 15, 2019 at 08:09am
Please accept my heartfelt condolences during this difficult time. Reverend Miller was a fixture of my childhood and my mind and heart are filled with many, many happy and cherished memories and traditions when thinking about the impact he has had in my life.
I am blessed to have had him in my life during such impressionable years and throughout my "growing up years" and adult life as well. May the memories of all the lives he enriched so beautifully give you comfort.
Stephanie (Haag) Foraker
Comment Share
Share via:
BR

Posted Feb 14, 2019 at 01:25pm
Our thoughts and prayers are with you Janet. Jim was very special to our family. So many memories. He truly cared about his congregation and spreading God's word. 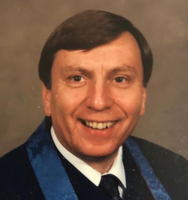 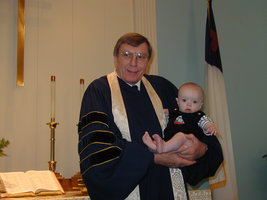 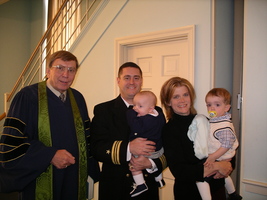 Another blessed baptism for the Forakers! We were truly blessed. Thank you Reverend Miller.