To share your memory on the wall of David Hangen, sign in using one of the following options:

David was a 1983 graduate of Reading High School and a three sport athlete: wrestling, football and baseball. He was a member of the 1983 State Championship Baseball Team, where he played as a pitcher and shortstop. In 2017, he along with his teammates, were inducted into the Reading High School Sports Hall of Fame. In 1988, David received his Bachelor's Degree from Millersville University, with a degree in Technology Education. While attending Millersville University, he was their starting quarterback for all four years along with their starting baseball pitcher. David then went on to achieve his Master's Degree from Wilkes University.

David started his teaching career in the Reading School District and taught the last 20 years as a Tech Ed teacher in the Muhlenberg School District. He also was a coach for Muhlenberg football and softball, coached Exeter Little League and Exeter High School Softball.

In addition to his wife and mother, David is survived by his daughters: Samantha and Emily both at home, his brother and best friend, Chris, Mohnton and sister Barbara Sheckler, SC. Other survivors include his mother in law, Bonnie Denunzio, Mt. Penn, brother and sister in law, Pete and Julie Denunzio, Exeter, sister in law Dana Denunzio, Mt. Penn; and nieces and nephews: Brenda, Melissa, Alison, Nicholas, Jake, Alex, Max and Jordan. He is predeceased by his sister Bonnie Berger.

A drive through visitation will be held on Tuesday, June 2, 2020, beginning at 10:00 am, at Lutz Funeral Home, Inc., 2100 Perkiomen Ave., Mt. Penn. In lieu of flowers, contributions may be made to the Dave Hangen Muhlenberg Scholarship Fund, c/o Business office at 801 Bellevue Ave. Reading Pa, 19605. Lutz Funeral Home, Inc. is in charge of arrangements. For online condolences, please visit www.LutzFuneralHome.com
Read Less

There are no events scheduled. You can still show your support by sending flowers directly to the family, or planting a memorial tree in memory of David P. Hangen.
Plant a Tree

We encourage you to share your most beloved memories of David here, so that the family and other loved ones can always see it. You can upload cherished photographs, or share your favorite stories, and can even comment on those shared by others.

Posted Jun 02, 2020 at 04:12pm
I am grateful to have had the opportunity to know and work with Dave, and my sincere condolences and love are with you and the girls, Vicki, and your entire families.
Comment Share
Share via:
KK

Posted Jun 01, 2020 at 03:27pm
Vicki, I am so sorry for your loss. You and the girls are in my thoughts and prayers.
I have told many, This phrase is greatly over used But not in this case.
Dave was one of the greatest, nicest, most giving men I have ever met in my life.
He will be missed by many.
God Bless
Kermit Krick
Comment Share
Share via:
DE

Posted Jun 01, 2020 at 03:13pm
Hi Vicki. So sorry for your loss. My thoughts and prayers are with you and your family. Debbie Ellis from Neenah
Comment Share
Share via:
DE

Posted Jun 01, 2020 at 07:38am
Vicki - So sorry to learn of the death of your husband. My thoughts and prayers are with you and your family during this difficult time.
Comment Share
Share via:
SR

Posted May 31, 2020 at 10:31am
Vicki - Please accept our most sincere condolences. Dave was an amazing coach and an even greater person. I learned so much about coaching from him but more importantly, how to work with and teach children in general. His ability to teach not only children, but adults as well, was one of a kind. He will be sorely missed. Our thoughts and prayers are with you and the entire family. Steve Riley and family 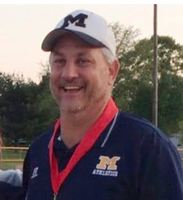