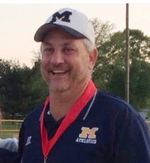 David P. Hangen, 54, formerly of Exeter Twp., passed away on Wednesday, May 27, 2020, in his home. He was the husband of Vicki (Denunzio) Hangen, with whom he shared 27 years of marriage. Born in Reading, PA, he was the son of Betty (Jones) Hangen, Reading and the late Albert E. Hangen.

David was a 1983 graduate of Reading High School and a three sport athlete: wrestling, football and baseball. He was a member of the 1983 State Championship Baseball Team, where he played as a pitcher and shortstop. In 2017, he along with his teammates, were inducted into the Reading High School Sports Hall of Fame. In 1988, David received his Bachelor's Degree from Millersville University, with a degree in Technology Education. While attending Millersville University, he was their starting quarterback for all four years along with their starting baseball pitcher. David then went on to achieve his Master's Degree from Wilkes University.

David started his teaching career in the Reading School District and taught the last 20 years as a Tech Ed teacher in the Muhlenberg School District. He also was a coach for Muhlenberg football and softball, coached Exeter Little League and Exeter High School Softball.

In addition to his wife and mother, David is survived by his daughters: Samantha and Emily both at home, his brother and best friend, Chris, Mohnton and sister Barbara Sheckler, SC. Other survivors include his mother in law, Bonnie Denunzio, Mt. Penn, brother and sister in law, Pete and Julie Denunzio, Exeter, sister in law Dana Denunzio, Mt. Penn; and nieces and nephews: Brenda, Melissa, Alison, Nicholas, Jake, Alex, Max and Jordan. He is predeceased by his sister Bonnie Berger.

A drive through visitation will be held on Tuesday, June 2, 2020, beginning at 10:00 am, at Lutz Funeral Home, Inc., 2100 Perkiomen Ave., Mt. Penn. In lieu of flowers, contributions may be made to the Dave Hangen Muhlenberg Scholarship Fund, c/o Business office at 801 Bellevue Ave. Reading Pa, 19605. Lutz Funeral Home, Inc. is in charge of arrangements. For online condolences, please visit www.LutzFuneralHome.com