To share your memory on the wall of Judith Mair, sign in using one of the following options:

Judith was a graduate of Pottstown High School and was very active in both the Birdsboro and Oley communities with the women’s clubs and area Historical societies. She was an accomplished award winning writer and poet, and wrote and directed a Women’s Club Series on 'Take 12' TV show for TV station in Philadelphia.

Judith enjoyed traveling the United States and abroad with her family, as well as numerous winter ski trips to New England, Austria and other parts of Europe. She found great pleasure in the sideline role of 'soccer-mom' to her son and eventually 'soccer-Nana' for her grandchildren playing at the Oley Valley Youth League and Oley Valley High School team. She was also active in antiquing, eventually starting her own business and later, a store front in West Reading.

Surviving is her beloved son Rolf and daughter-in-law Deborah, and grand children Haley and Mitchell Mair. She is also survived by nieces and nephews in both Florida and Germany. She is pre-deceased by her step father Milton Yohn and her sister Charlene Gebel.

Services and interment are private. In lieu of flowers, contributions may be made to American Cancer Society, 3893 Adler Place, Ste. 170, Bethlehem, PA 18017. Lutz Funeral Home, Inc. is in charge of arrangements. For online condolences, please visit www.LutzFuneralHome.com
Read Less

To plant a memorial tree in honor of Judith A. "DeSantis" Mair, please visit our Heartfelt Sympathies Store.

We encourage you to share your most beloved memories of Judith here, so that the family and other loved ones can always see it. You can upload cherished photographs, or share your favorite stories, and can even comment on those shared by others.

Posted Aug 28, 2020 at 12:14pm
Rolf and Family, Your mom left her mark on this world with her kindness, wit and charm. Growing up your parents were an integral part of our family. I remember one time-boy was I in trouble with my mom and dad deservedly so but your mom snuck me some good hugs..and made me feel so much better. Thinking of you and your family.
Comment Share
Share via:
JZ

Posted Aug 23, 2020 at 04:06pm
Rolf, Your Mother and I shared many wonderful times together while in Junior Woman's club and had many laughs while skiing. Also often think of the time we were camping in the Poconos with your family and the rain that keep us in the motor home
She was a great lady and I value her years of friendship. Sincere sympathy from Jim and I to you and your 👪

Thank you Joyce, nice to hear from you as well as the quick story. I hope you and the family are doing well!
D

Posted Aug 23, 2020 at 10:59am
Judy will be dearly missed at the Village Salon!!! We looked forward to her stories, wit and humor. She was a very unique and special lady and I know I am definitely a better person for having known her. She was very persuasive and knew how to charm to get her way and we will miss that the most. Wether it was her excuses for being late or trying to convince me to shorten her color timing, she always had a good tale to tell! But most of her stories were about her family and how proud she was of all of you! May she rest in peace!
Sincerely,
The Village Salon Staff
Dawn, Tonya, Kathy, Crystal, Michelle, Ashley and Missi
Comment Share
Share via:
RM

Thank you for the kind words. I know she always looked forward to going there and having conversation with everyone. Upon her return, there were often a few stories about you and others as well! Thank you again.
EB

Posted Aug 23, 2020 at 07:06am
Rolf - I'm so very sorry to hear of your mom's passing. She was a wonderful lady. I have many fond memories of having a snack in her kitchen after coming in from playing in the snow. Our condolences to you and your family.

Eric! Thank you for the memory and so good to hear from you. I'd love to catch up some time, I'm still in the area and also at the garage in Stony Creek. 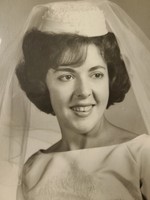