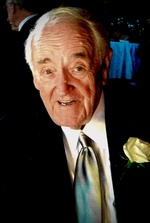 Our family lost our legend. John R "Jack" Bertolet Sr, 90 of Bernville passed away peacefully on Monday January 11th in the Reading Hospital at Tower Health. Jack was predeceased by his first wife, Eleanor J (Taylor) and his second wife, Barbara A (Krammes). Born in Reading, PA he was the son of the late Joseph and Miriam (Thornburg) Bertolet. Jack was a graduate of Glen-Nor High School and the former owner of J Bertolet Inc in Orwigsburg.
In 1964 Jack achieved his American dream when he built a Volkswagen Franchise in Orwigsburg, PA. Over his 56 years of ownership he enjoyed the customers, the employees, the friends he made, and the wonderful times they shared. When it was time for him to pass the business on to his sons Jack Jr and Blayne he still spent most days in his office offering daily witticisms.
Jack's philosophy on life was to surround yourself with great people and better friends. He cherished his neighbors and the weekends they spent around his picnic table reminiscing about the memories they made and the good times they shared. At the holidays he loved to fill his home with warmth, cheer, great food, family, and friends.
His greatest legacy will be the one he left to his 6 children, their spouses, his grandchildren, his great grandchildren and that was his gift of unconditional love. We will cherish his memory and miss him dearly.
Jack is survived by his loving children, Debbie wife of Ben Scaturro of NJ; Jack Jr husband of Karen of Exeter Twp; Dianne wife of Steve Schmehl of Palmyra, Cindy wife of Jim Schrier of Virginia; and Blayne husband of Taran of Exeter Twp. He is also survived by 15 grandchildren and 28 great grandchildren. He was predeceased by his daughter Lisa Ann, brother Harry Jo, and sister Star Lee.


A Celebration of Life will be held at a later date. Interment will be at Forest Hills Memorial Park, Exeter Township. Lutz Funeral Home, Inc. is in charge of arrangements. For online condolences, please visit www.LutzFuneralHome.com